Behaviors in Light and Sound After Iannis Xenakis

N-Polytope is a spectacular light and sound environment combining cutting edge lighting, lasers, sound, sensing and artificial intelligence software technologies inspired by composer Iannis Xenakis's radical 1960s-1970s works named "Polytopes" (from the Greek poly, many and topos, space). The installation is steered through a sensor network utilizing cutting edge machine learning algorithms which learns different rhythmic and temporal patterns produced by the light and sound and helps in generating a totalizing, visceral composition that self organizes in time. 150 10-watt LEDs and many tiny speakers are suspended through the space on a single ruled surface constructed of thin aircraft cable, creating a walk-through performance environment which continually swings between order and disorder, akin to Xenakis's original fascination with the behaviors of natural systems.

A co-presentation of the Biennale internationale d’art numérique (BIAN) and the Darling Foundry.

Exceptionally for this exhibition, the Darling Foundry will be opened every day from Thursday, May 1st to Tuesday, May 13th. 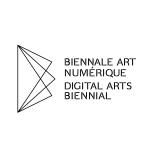 Chris Salter is Director of the Hexagram Concordia Centre for Research and Creation in Media Art and Technology, Co-Director of Hexagram|CIAM and Associate Professor, Computation Arts in the Department of Design and Computation Art at Concordia University, Montreal. Salter studied economics and philosophy at Emory University and received his Ph.D. in  theater  directing and criticism with a second concentration in computer-generated sound at Stanford University where he worked with former Brecht assistant Carl Weber as well as pioneers of digital synthesis John Chowning, Max Matthews and Chris Chafe at the Center for Research in Computer Music and Acoustics (CCRMA). He was visiting professor in music, graduate studies and digital media at Brown University and the Rhode Island School of Design (RISD) before joining Concordia University’s Faculty of Fine Arts in 2005. He was also Guest Professor at the KhM in Cologne in 2010 and Guest Faculty at the Masters program in Media Arts History. Institute für Bildwissenschaften. Donau University. Krems, Austria. October 2011. He was appointed Director of Hexagram-Concordia in 2011.